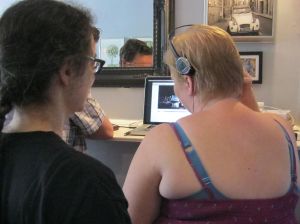 Post-production.  That’s a big, scary word to us novice filmmakers.  At least with filming, you can SEE it happening, and have a voice in shaping it.  But post – that’s when you hand your “baby” (the raw footage and audio files) over to picture and sound editors, and trust that they will follow your notes and end up with something good.

You’ve heard the saying, “Films are made in the editing room”?  It’s true – and yes: scary again.  No matter how brilliant the actors were, how skilled the cinematographer and sound recordist, an editor can manipulate those images to say anything he or she wants.

Aloud is intended to be about 10 minutes long.   It was shot over two days, yielding 2 hours of raw footage. For most scenes, there are 3 takes, but for a few, up to 6.  Every section of each take – every expression on an actor’s face, every slight gesture – can be moved around.  A finished 10-minute film could have hundreds of cuts in it – the options are dizzying.

Post-production can take many hours in a studio to “lock” the picture, and then the process is repeated for sound.  And then music is added, and finally the titles.  And then it’s DONE and the finished film can go out into the world! That’s where we’re heading…

Our Indiegogo campaign to pay for post-production costs runs only one more week – until September 12. Check out the trailer at http://igg.me/at/aloudtheshort, and visit the Gallery tab to see photos taken on set.