Back when we were auditioning actors for the film version of Aloud, around March 2014 – when we planned to shoot that fall! – we asked British-born Laura Vincent, whom we know from many theatre productions (including Cosí, in which she, Aloud director PJ Hammond and writer Tina McCulloch all acted for Alumnae Theatre Company), to be our reader – she’d read the other parts against the actors who auditioned. And then when we couldn’t find the right person for the role of Kai the barista – well, the solution was right in front of us.    Here’s her slightly tongue-in-cheek bio: 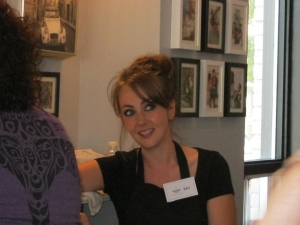 Laura loves PJ and Tina. They go way back (her stripper heels are in her closet right now). Laura is a Toronto-based actor and Queen’s graduate, and a feature film that she acted in, The Cocksure Lads Movie, premieres in Toronto on August 7th and around Canada on August 5th. Mainly a stage actor, selected previous theatre credits include Hamlet in Hamlet, (Socratic Theatre); Candace in Jesus Jello (Toronto Fringe); Alice in The Voysey Inheritance (Amicus); Alice in Closer  and Soldier in Palace of the End  (both Alumnae Theatre Company); Prudence in Beyond Therapy (Village Players). Laura is naturally very sweet and timid, so playing the surly, aggressive Kai was a real challenge.