This project has not been typical.  We’re not recent film school graduates – we never even *went* to film school!  We didn’t do an Indiegogo campaign before filming – we filmed on on our own dime.  We did a “soft launch” on this fundraising campaign – like restaurants opening quietly for friends and family before they do the big fanfare to the public.  Or like a theatre production running a week or two of previews before the “real” opening. But now it’s time to officially GO LIVE.  To raise money for post-production costs.  This is it, people.  We are officially begging! 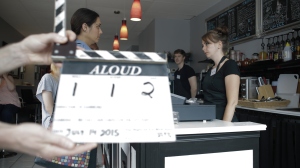 FIRST DONATION TODAY GETS A COFFEE GIFT BASKET AS A THANK YOU.  We need someone to get the ball rolling, to say how all the cool kids are donating.  Actually, we need someone local to do that so we don’t have to mail the basket.

And now you are asking yourself, wasn’t there a donation already this weekend?  Yes, but Tabitha Keast – though we love you for many reasons – you donated too early and cannot get the gift basket.  Nope, not even if you give us the pouty crying face.